This blog post was written for, and requested by, the internal TNC blog, Many Voices.

Indonesia, the largest archipelago country in the world, has so much diversity in its people, land, forests, coasts and seas, that it has countless reasons for environmental conservation.

This country has one of the highest percentages of human and endemic biological diversity, yet Indonesia is plagued by the problems it shares with most developing countries: poor infrastructure, insufficient capacity, lack of environmental education, corruption, rapid unsustainable development alongside the need to grow economically—primarily by exploiting its natural resources—to support its expanding population.

At the policy level, Indonesia has been spearheading some of the most progressive environmental laws, reforms and initiatives, which has led the government—with the support of entities like TNC—to partake in the Coral Triangle Initiative, create massive MPAs, enact a moratorium on logging concessions, pilot innovative programs like REDD+, and launch a strategic long term development plan that aims to achieve a pro-poor, ‘green’ economy. (UNEP, 2015) Yet, as is often the case with policy, implementation is far from flawless.

As a large island nation, Indonesia’s government is decentralized and much of the laws and policies created in the capital, seldom make it to the most remote areas of the country like Papua or Kalimantan. These areas suffer from massive deforestation primarily due to the logging and palm oil industries that are either unaware—or care little about—proper natural resource management and/or sustainability. Through corruption and impunity, most entities suffer no repercussions, and the environmental destruction continues. Conflicts between ethnic groups and issues over land rights and use policies also complicate the issue. Similar damage is experienced in the sea, though it’s more difficult to see or measure. Over-exploitation of marine resources, runoff pollution and trash—often increased and driven by a rise in local and international consumption and tourism—are greatly impacting Indonesia’s incomparable marinescapes. 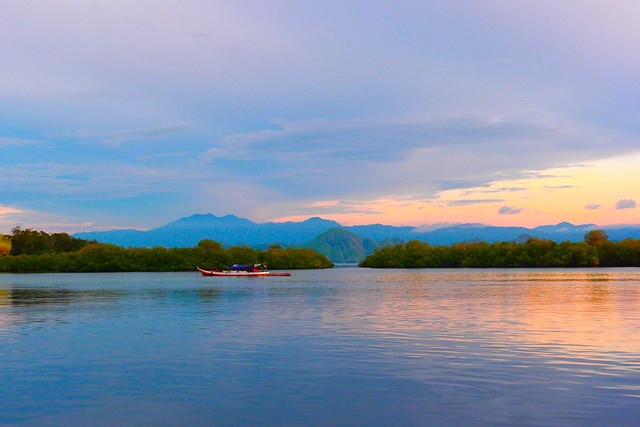 Though the Indonesian constitution explicitly states the right of any individual to a good and healthy environment, much of the irreparable environmental damage and habitat destruction that has already been done threatens this decree. (Environmental Compliance and Enforcement in Indonesia – Rapid Assessment, 2008) While the government appears to be working hard to address this, it’s difficult to see it in hectic Jakarta, a megacity of nearly 10 million people and the headquarter site of TNC Indonesia. The general environmental decline the entire nation is experiencing, isn’t necessarily from bad policies—though there are some—but largely from a disconnect between the policies’ spirit and millions of Indonesian people.

A day in Jakarta would expose you to low air quality caused by thousands of vehicles and motorcycles exerting black clouds of smog into the air. There will be trash everywhere, often thrown thoughtlessly on the ground or out of windows by commuters, or burned in piles on the sides of roads. Putrid water canals go untreated, and there are millions of people consuming goods that create a lot of plastic waste, among other types, much which will eventually end up in the ocean. Even for those with an inclination to recycle, no real infrastructure exists for this yet. And this is the capital city—the zenith for available services and infrastructure development for this country.

The ‘green’ policies have yet to trickle down through Indonesia’s population and affect change from one of the country’s biggest untapped resource: human beings. Though urban conservation and sustainability in daily-life is a brand new global trend, most Indonesians are far removed from it. This sentiment extends beyond city borders, and other types of environmental degradation by local people are caused, not from malice, but out of economic necessity and ignorance of the magnitude of their damage. Some of this includes the  trafficking of endangered birds and other animals, cyanide and dynamite fishing, coral harvesting for tourism souvenirs and tank decoration, and the general, polluting of land, ocean and other waterways, including open defecation in rivers and streams, all part of unsustainable and/or unhealthy livelihoods for Indonesians themselves.

The behavior of the Indonesian masses is unaligned with the high-level policies of the country to great detriment; nevertheless, there is great opportunity for the Indonesian people to become a part and driving force for environmental conservation with the right motivation and education. As an extremely religious nation, with more than 80 percent of the population identifying as Muslim, there’s a strong underlying ethic within Islam that advocates for environmental stewardship and care. (Mangunjaya and McKay, 2012)

Given that Indonesia has so much to protect—important not only locally, but globally as well—it’s time to engage this population to a higher degree, which will help to better apply the nation’s progressive environmental policies by gathering support, gaining traction, and advancing conservation in solidarity.